Three little words that describe MG in it’s most exciting and formative years, from the 1928 London Motor show which saw the launch of the first M type Midget, to 1936 when the last overhead cam car came out of the Works. These were the Cecil Kimber years... golden years for automobilia and MG in particular. Kimber was in his prime, an innovator, a feisty task master and a dogged & enthusiastic proponent of automobile excellence through competition. It is said that the early Midget and it’s following brethren would scarcely have made such an impact without the tremendous boost furnished by MG’s racing and record breaking achievements.

Early successes in the Brooklands 12/12 races propelled MG into the forefront of light car racing in the 30’s... the men, women and cars were legendary and the accomplishments were legion. Through the 30’s MG won more motoring competitions of all sorts than any other marque! 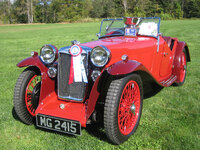 Of the 11,500+ MMM cars produced between 1928 and 1936 there is one common thread: the strong, small displacement, single OHC engines that were the heart of these four cylinder Midgets and six cylinder Magnas and Magnettes. They are marked by a unique vertical dynamo/bevel gear cam-drive train and range from 746cc to 1271cc.

Today more than 3000 of these historic MGs are in the hands of enthusiastic MMM Register members worldwide, and as it is the mission of the Register to preserve and foster the use and enjoyment of these historic prewar MGs, the North American MMM Register welcomes you to come see, up close and personal, the MGs that bear Cecil Kimber’s fingerprints!

- Midget
The first of the MMM (Midget - Magna - Magnette) cars, this being the Midget. Crude by modern standards, but a very willing sports car for the price in its day. Readily recognizable by its boat tail. Produced from 1929 through 1932.

- Midget
Shown here in 4-seater form, the D-type was a less-than-successful attempt at commercializing the C-type. Due to longer wheelbase and more coachwork, the D lacked the performance of its predecessor. Only 250 were produced between 1931 and 1932, and surviving cars are rare today.

- Magna
The first of the Magna model, the F was essentially a 6 cylinder version of the C and D. Its increased engine capacity, derived from the Wolseley Hornet, gave it a very sprightly performance. 1244 cars produced in 2-seater and 4 seater open and closed configurations between 1931 and 1932.

- Midget
Considered by many as the pinnacle of pre-war MG Midgets, the J was the first of the traditional "square-rigger" style. Its 847 cc engine delivered a 78 MPH top speed, but its two-bearing crank was the weak link in the design. 2463 cars made during 1932 - 1934 in both 2 seater and 4 seater open configurations. The later years were produced with swept wings as standard.

- Midget
A supercharged version of the J2 with a 750 cc displacement, the J3 was designed for street and occasional trials work. Only 22 were built during 1932 and 1933.

- Midget
Only 9 of these J4s were ever built. Strictly not for the amateur, these cars were a serious contender in all-out racing. Due to its added power, it was a tricky and sometimes dangerous car to drive, the advances in engine performance outstripping that of its chassis.

- Magnette
Probably the most serious contender in international racing to come out of Great Britain prior to the war was the famous Magnette range K3. Here shown in its initial slab-tank style, Ks were built in a large variety of forms including single-seat, 2-seater, and 4-seater open versions as well as closed saloons.

- Magna
Made in about the same period as its diminutive relative, the J, the L1 (4 seater) and L2 (2 seater) sported a six-cylinder engine, and was the Magna model. Around 600 sold. The L-type's proportions bear a striking resemblance to the later T-series midgets, but it can be recognized by its more aggressively slanted radiator.

- Magnette
The N was introduced in early 1934. A KD engine with 1271cc was fitted to the later K-type road cars. It was improved by fitting a modified cylinder head and the crankshaft used a similar design to that of the P-type engine. In addition to the two and four-seater, N-types were fitted with unsold K2 bodies, resulting in the ND. The NA Allinghams were built at the instigation of W. H. Allingham of Stratford Place, London, as were Airline Coupes.

- Midget
The P was a much more refined Midget that its predecessor the J. Its 3 bearing crank was much more robust delivering a very smooth performance with the same 847 cc displacement. The later PB had an increased displacement of 939 cc and a few more creature comforts. 2499 were produced from 1934 to 1936 in 2 and 4 seat configurations.

- Midget
Derived as much from the Magnette line as from the P Midget, the Q Midget was again designed to appeal to the racing enthusiast. It delivered 110 bhp from its 750 cc engine - no small feat of engineering. Its lack of commercial success is perhaps attributable to the fact that the £555 price tag put it beyond the means of the average enthusiast. Thus only 8 were ever built making it the lowest production of any pre-war MG.

- Midget
Yet another attempt to capture the glories of racing by the MG Car Company, the R type represented the further experimentation in redesigned chassis and suspension started in the Q type, this time in monoposto or single-seater configuration. A bit heavy to match earlier successes, the R fell victim of the close of factory racing in 1936. 10 of these were nonetheless produced before this in 1935.